So that no one faces cancer alone.®

Heather’s Journey: If there were no trees…

“I thought, what if people don’t have a view of nature outside their hospital window to make them feel better? Art, providing a window of hope, is the next best thing.” ~ Heather Rodale

The depression that Heather Rodale felt after treatment for melanoma ran deep and dark.

“My doctor told me I’d need to find my own healing, and that it was different for everyone,” she says calmly. Fourteen years have passed since she was diagnosed with melanoma  on her nose. But she well remembers the conversation. He also said, “Attitude is everything, and if you want me to do my best job, you must have a positive attitude.”

Although she knew he was right, she was despairing: sad about her present and fearful about her future.  How, in fact, was she going to become happy?

Her oncological surgeon had removed most of the skin from her nose, grafting skin from her neck. There was no chemo or radiation. The period of time between diagnosis, treatment, and completion had been short, and within two months, the graft had taken, although it would take a year for normal skin color to return. She’d need repeated tests to ensure that the disease hadn’t recurred.

The tests always carried a mantle of unease, even when she tried to mitigate it. “The night before my X-rays, I always made sure I did something fun, like dinner or a show. One year I saw Billy Crystal: 700 Sundays, and laughed so hard that my rib cage was sore. I realized it was important to consciously do something fun.”

But as much as Heather tried to control her worries, they crept in. Melanoma has no five-year  milestone marker like other cancers. Her depression was founded on not knowing if she were cured. “One of my daughters told me, ‘You aren’t going to worry until I tell you to.’ That helped. Having calm and optimistic people around you is important,” she smiles and brushes her fingers through her hair.

She’d been a perfect melanoma candidate: fair skin that burned and didn’t tan, blue eyes, and light brown hair. Importantly, as a teen she’d been prescribed sun lamp treatments for her complexion. It seemed to be a straight trajectory to melanoma.

After treatment, Heather returned to her job at Rodale Publishing where she worked in training and leadership development. But her depression was all-encompassing. “My job was to help people develop, and here I was, deep in my own depression.” She folds her hands together, laying them on the table.

This is when she learned that there is a difference between being cured and being healed–as she grappled with her new life as a cancer survivor, as a woman who could no longer go out in the sun, as a single mother who’d sent her fourth and last child off to college.

She hadn’t had a caregiver while undergoing diagnosis and surgery. “I didn’t have anyone at the time,” she says simply. “My sister and daughter went to the surgery. And they lined up people to have dinner with me. But I didn’t have anyone to pick me up and take me to doctors and tests. At the time, though, I didn’t feel that I needed a caregiver. Also,” she stops a moment, “I was numb from depression.”

Art. Always art. She and her four sibs had grown up in the country with a mother who had loved art and had always presented art projects for her children.  As Heather considered the importance of art in her life, she realized that everything that had helped her heal was based on the arts.  Before cancer, she had been a quilter. What would she be now?

For two years, she ruminated, and the idea of Healing Through The Arts germinated.  Could she, somehow, bring it altogether? Could she bring joy and healing through art?

“Dr. Roger Ulrich researched the importance of nature and healing,” Heather continues, “and found that people whose hospital windows offered a view of trees went home at least a day earlier and required less pain medication than those whose windows overlooked a brick wall.” Art, she realized, could be a “window” of hope when a view of nature in hospitals was not possible.

She started the organization in 2009. A year later, she held the first art show,  a juried competition for high school and college students to submit art that promotes hope, healing, peace, comfort, and inspiration to patients. Local healthcare facilities request the submitted artwork for their walls. Over 1,500 students have submitted art over the past nine years, and more than 26 hospitals and healthcare facilities have requested and received artwork. This year’s show runs from February 23 through April 14 at the Banana Factory in Bethlehem. 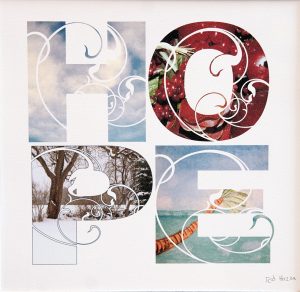 Heather tells a story about one of the pieces of art that a high school student had created: One year—just after the first art show—a man, whose wife was hospitalized with breast cancer, sat in a Cancer Support Community support group, and described his day at the hospital. He’d left his wife’s bedside to get a bit of exercise. As he sadly walked through the hospital’s corridors, he spied a drawing with four letters spelling HOPE. This drawing filled him with such hope that he took a photo with his phone. When he arrived at his support group, he swiped through his photos until he came to the one that said HOPE, which he showed to the others.

But the art show and dissemination of art are not the organization’s only project. It has also produced meditations, in which artwork is combined with soothing music.

Even as Heather was developing Healing Though The Arts, she was changing her own creative output. She shifted her interest from quilting to creating mandalas, a spiritual symbol in every culture, whose purpose is to help meditation and healing.

“But Healing Through The Arts isn’t just an idea that I was able to turn into an organization,” Heather speaks eagerly.  “Everything about it was spiritual. Everything, including the website, came to me in dreams.

“Every step I’ve taken has been based on a previous step. At each step, I became a teacher of some sort.” The oldest of five kids, and 13 years older than the youngest child, Heather looked after the two youngest when her mother became sick. After college, she became a first-grade teacher.  When she had her own four children, she enhanced their educational opportunities outside of school. Then, in 1999, she sponsored and guided a Kosovo refugee family in living in Allentown, teaching them English and resettlement skills for a new culture.

All of those steps led to Healing Through The Arts. “I’ve always been empathetic,” she says matter-of-factly. “So, when I thought of people who don’t have trees outside their hospital windows, I realized that art would be the next best thing.”

Heather was on the board of the Cancer Support Community, and is currently a member of the Ambassadors of Hope, community members who advise and support the organization.